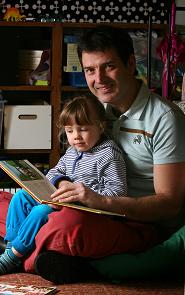 Disabled Dad in a Wheelchair

It’s time to take the travelling circus on the road again. As we get ready to throw all of our goods and chattels into the car for a camping trip to France, I cannot rid myself of a nagging feeling that things are about to change in a big way. The next phase of Rosalie’s life is nearly upon us, as she will be starting school in September. I must confess to a certain amount of anxiety. It is not for Rosalie that I worry, as I’m sure that she’s ready. It’s me that isn’t.

When I discussed the subject with my mother recently, she regaled me with tales of parents returning from school in tears after dropping off their children for the first time. Starting school feels to me like the first milestone in the fledging process. With my well-documented tendency to cry these days, it is a racing certainty that I will get “something in my eye” before I reach the school gate.

My wife Penny and I are fortunate to have been able to spend so much time with Rosalie, as well as having the freedom to be impulsive about the adventures that we all take together, as neither of us work full time or what could be described as conventional office hours. From September, it will be Rosalie who keeps regular hours. Just getting her there in the mornings is an intimidating prospect as my morning routine usually takes around 90 minutes from duvet to front door. This is due to my paraplegia rather than laziness.

As well as “specific logistical issues” you will thank me for not elaborating on, I have to deal with the physical challenges of getting from bed to wheelchair through the fug of the medication that I take for pain management.

We have become used to keeping our own timetable, enabling museum visits on weekdays, for example. Or going to cafés for lunch without queueing to get in. We have been part of the massed ranks of the under-4s, living in a world where Rosalie has seniority. Yet when she’s been with me her time in the pool, the sandpit or on top of the climbing frame has been somewhat limited.

Anyone who has followed my weekly column in these pages for the past six months will, I hope, be a little more enlightened about some of the challenges facing a disabled parent. The difficulties in having an intrepid toddler who wants to reach the summit of a climbing frame that is out of my reach are probably pretty obvious. Then there’s the problem of the speed increase offered by the scooter, or the minefield that is a floor covered in toys, all cracks and pops as yet another favourite goes under the wheel.

My hope is that I have been able to provide a few snapshots of life as a wheelchair parent, and enable people to break it down into a series of logistical problems. That said, it is presumptuous to assume that I am likely to be anyone’s first experience of disability. There are more than ten million disabled people in the UK, of whom only 4.6 million are over the state pension age. One in ten 16-24-year-olds is disabled. Obviously not all disabled people are new parents, but I hope that I have given people an insight into some of the situations that many people face every day. I have attempted to strike a balance between the difficulties and some of the (occasionally unconventional) solutions that we have found. Problem-solving has been an integral part of my parenting experience, from discovering the multiple handles offered by a decent pair of dungarees, to coaching Rosalie to hold an umbrella while sitting on my lap when it’s raining.

As Rosalie has grown, she has gone through an important transition from dangerous loose-cannon of a toddler to becoming a little girl who can understand increasingly complex explanations. As well as growing physically (she can now climb on to my lap without any assistance), she has grown in confidence. The other day she asked me: “Daddy, why don’t other children know why you’re in a wheelchair?” I told her that it was because no one had explained it to them. Then I asked: “How do you know why I’m in a wheelchair?”

“Because it’s in my brain.”

“But that’s because we told you.”

“Yes, but it was already in my brain.” Then she pointed to her head. “My brain is in here.” A pause, and then, “And on top are the buttons that make my body work.” I’m not sure what to make of this, except to conclude that my disability has been an ever-present in her life, and she can’t even remember how she came to know why.

The next chapter of her life will inevitably involve having to pass on her knowledge, as her classmates will no doubt be curious about her dad being in a wheelchair, and I hope that this novelty doesn’t become a burden. I would hate to make her embarrassed, although that is the inevitable lot of every parent at some point, and at least she won’t have to put up with me dancing in public. At a birthday party for one of Rosalie’s friends yesterday, I was surrounded by children who were mostly a year or so older than Rosalie, and I found them to be less interested in me than the toddlers at Rosalie’s nursery. While I was braced for the usual round of questions (Why are you in a wheelchair? Why can’t you walk, etc), instead I had to deal with the humiliation of being outdone by bowls of jelly and ice cream, which was clearly commanding more interest.

This offers another glimpse of what’s to come. I am getting used to the unpredictability of my life as a wheelchair-using dad. There are often times when I enter the fray fired up for difficult encounters with people or the built landscape only to find things effortless and people relaxed and considerate.

There are other days, too. The days when people let doors go in my face, or every building has small steps at the entrance. Those are the days when people stare, when Rosalie thinks that it’s fun to play spontaneous chasing games in the street, or refuses to get off my lap when we reach a kerb. But then, everyone has those days. They’re called bad days.

The response that my column has drawn has been largely encouraging. I set out to demystify disability and the day-to-day challenges that I face as a wheelchair-user. There have been a couple of responses that betray a lack of imagination, in the “I couldn’t go on if it happened to me” category. I can assure anyone reading that if my experience is anything to go by, you have no idea what you could or couldn’t do until you are faced with such a situation.

While I understand that the sentiment behind such “over-cliff” comments is one of admiration, I find this response disturbing, because following such logic offers me very little. If my circumstances are so tragic or difficult to comprehend that people would rather take their own lives than face such a future, then what do they leave me with? How am I to get enthused about anything if my life is “a fate worse than death”?

Of course my life isn’t tragic. I can’t walk, and I face numerous other difficulties in my daily existence, but I’m mostly happy and I enjoy my life. I have a fantastic and loving family, and there’s nothing like a child to make one get out of bed in the morning. OK, so that might be because she has spilt a glass of water over you, or because you have a piece of jam-covered toast stuck to the side of your head, but that’s part of the fun.

To be fair, the majority of the messages have been positive and often tremendous fun. I read about growing up in a large Glaswegian family with a mother in a wheelchair, the kids fleeing upstairs to avoid punishment, until mum got on to the floor and hauled herself up one step at a time (thankfully, our flat is all on one level).

Then there was the hilarious account of trying to help a dad with polio out of numerous ditches on always-exciting adventures. I have had a fond account of a profoundly deaf husband rediscovering sailing, and a description of how much more enriching life was with a blind father. I have received numerous other tales, and they are all infused with a sense of pride. They have been a great help in giving me a different perspective, enabling me to project forward and imagine how Rosalie will feel when she’s grown up.

A paraplegic friend recently asked his daughter: “If you had one wish, what would you wish for?” Expecting the “I wish I had a pony” answer, he was shocked when she said that she wished he could walk again. While their experience differs because his children remember when he could walk, there is a shared experience in that our disability will always be a part of our children’s lives.

But that’s how it is, and I have a choice. I can either spend a life marred by regret and frustration, or I can make sure that I make the most of the opportunities that still lie ahead. And above all, make sure that Rosalie has a father to be proud of.

So, putting aside any thoughts of school, we’ll pack the car and head for the ferry. But I’m ready to face the many challenges that lie ahead of us. Probably starting with swearing at an unruly tent in the rain-soaked corner of a muddy campsite somewhere south of Versailles. Just like any other dad.